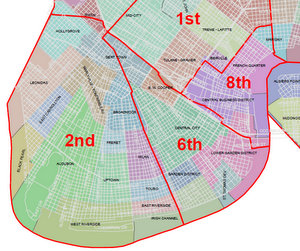 During Monday’s review of the New Orleans Police Department budget, Councilman Jon Johnson asked Serpas why the geographically-largest police district, the Seventh (in the eastern part of the city), had fewer officers than the Eighth District, which covers the French Quarter. Part of the difference has to do with the relative population densities of each area and the fact that the Eighth District receives the majority of the city’s tourist population, Serpas said, but admitted the staffing levels are long overdue for an update.

“I would never try to defend to you or the public that some of our decisions on deployment are rationally based,” Serpas said (see video of the exchange, beginning just after the one-hour mark). “It’s historically based and may be completely flawed. We just don’t know.”

The answer, Serpas said, will come in the form of a computerized assessment of the city’s police deployments that will likely recommend redrawing some of the district lines to even out the workloads between them. With more consistent expectations about call volumes from specific shifts, supervisors can then be more proactive in scheduling community policing, Serpas said.

The department has just been approved to use $300,000 in federal stimulus money to purchase the program, which will not take long to run once it is installed, Serpas said. Johnson sought assurance that this process would bring relief to the Seventh District, but Serpas deferred to the results of the program.

“We need some science to tell us what to do, and I can’t defend what I don’t understand of what’s been going on of all the last nine years,” Serpas said. “I look forward to the analytic software telling us exactly what it needs to look like.”

Serpas urged the council to brace themselves for what could be radical recommendations from the program. Other than a few minor changes in 2000, the district lines in New Orleans have been substantively the same for 50 years. By contrast, at his last job in Nashville, the district lines were redrawn every other year.

“We need to educate our neighborhood groups,” Serpas said. “Our community has become very attached to their districts.”