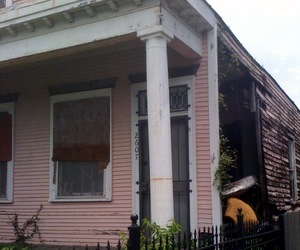 This Valence Street home, with a hole in its side, has been the subject of complaints by Freret residents for more than a year. (Via Freret Property Campaign)

The slow process for cleaning up dilapidated properties was a source of frustration Tuesday night for a group of Freret residents making final preparations to launch a major anti-blight campaign in their neighborhood.

Working off data from the Freret Neighborhood Center’s property survey collected earlier this year, the campaign will target vacant buildings in poor or fair condition that are not under construction. The group will send letters to the owners of the 248 parcels that meet these criteria in the area bounded by Dryades and Claiborne, from Jefferson to Louisiana avenues, asking their plans for the properties and urging them make the neighborhood free of abandoned homes.

While the letter has a sense of urgency – asking recipients to respond immediately – it avoids a confrontational tone, and instead offers the assistance of the property campaign. Many of the owners of blighted properties are fairly sympathetic cases, said Eva Sohl of the Freret Neighborhood Center: working-class people still struggling to pay for repairs after Katrina, people who were ripped off by dishonest contractors, or families sorting through inheritance issues.

Other properties, however, have exhausted the group’s goodwill. One Valence Street home, for example, has been the subject of negotiations with city officials since last summer with no apparent result, according to extensive documentation discussed by the group Tuesday evening. Despite multiple code-enforcement meetings and correspondence with both city officials and Councilwoman Stacy Head’s office, the building is still a danger in an otherwise recovering block, they said.

“Ever since Katrina, this damaged property has gone untouched and not gutted with furnishings still inside,” wrote Zenobia Lieteau, an 81-year-old neighbor to the property, in one recent letter. “It also has been falling apart, [and] as a result of this several times the outside walls landed on my property. I fear that one day it will collapse while I’m at home and cause injury to me.”

The property campaign decided Tuesday to pursue one last untapped resort, the city health department, in hopes that attention from that agency will lead to some action at the home. Pursuing aggressive action against the most blighted properties while taking a gentler approach for those with legitimate issues is a sound strategy, said Dean Gancarz-Davies, especially for properties with such a long history of complaints.

“This person has routinely ignored or disrespected the process,” said Gancarz-Davies, who is president of Freret Neighbors United. “This is way past our letter. That letter is not going to hold much weight with routinely delinquent people.”

That a house with a gaping hole in it could bedevil an 81-year-old neighbor for so long illustrates the broader difficulty of trying to combat blight in New Orleans, Sohl said.

“Who has the power to do anything about this property?” Sohl said. “It’s almost a slap in the face that here’s this property that’s been sitting for years upon years. I think we should try to say something about how screwed up this process is.”

The property campaign will reconvene at 6 p.m. Wednesday, Nov. 17, to finish looking up the names of the blighted properties’ owners, printing them onto letters and preparing them for mailing.