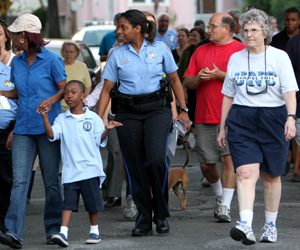 Police and residents walk together during September's anti-crime march in the Fontainebleau neighborhood.

The New Orleans Police Department’s effort to reconnect with individual communities will bring it to two different Uptown neighborhoods Wednesday night, with anti-crime marches planned for both the university area and the Irish Channel.

The NOPD Second District will coincide with a march sponsored by Loyola and Tulane to “Take Back the Night” from sexual violence. From the Loyola University news service:

On Wednesday, Oct. 27, students, faculty, staff, friends and neighbors will gather in the horseshoe outside of Marquette Hall on Loyola’s main campus at 6 p.m. Here, participants will listen to the powerful story of a survivor of sexual violence and a tribute to Kimberly Kelly, a Tulane graduate student who was fatally shot last May in a suspected domestic violence incident.

The evening will continue with a candle-lit, chant-filled march from Loyola’s campus, down St. Charles Avenue and Broadway Street, to the Myra Clare Rogers Memorial Chapel on Tulane’s campus. There, members of the audience can share their past experiences and the event will close with chanting led by the Tulane University Ladies A Capella group and an interfaith service.

Take Back the Night is designed to heighten awareness of sexual violence and to empower survivors. The event calls for an end to gender-based violence throughout the New Orleans community.

“For those who wonder how they can actively work for the causes of hope, justice, and non-violence here in New Orleans, Take Back the Night is an outlet and call to action. The power of standing witness to the stories and strength of survivors offers healing to those suffering,” said Brooks Zitzmann, chairwoman of Take Back the Night 2010 and a staff counselor at Loyola.

Raffle tickets can be purchased in the Danna Student Center beginning Oct. 19 and in the Lavin-Bernick Center beginning Oct. 21 for a chance to win one of several gift baskets. Money raised will go to the Metropolitan Center for Women and Children, Crescent House Healing Center and the SANE (Sexual Assault Nurse Examiner) nurses at the LSU Interim Public Hospital. Tickets will be on sale through the night of the event. 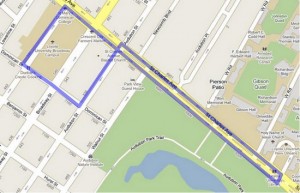 Second District police will follow a similar, but slightly different route. They too will begin at Loyola University and march up St. Charles, but will turn before Broadway onto Audubon, head down to Dominican, then up to Pine and back to St. Charles for a return to Loyola.

The NOPD Sixth District’s crime-prevention march will be held in the Irish Channel this month, which along with the Lower Garden District has witnessed near-weekly shootings of late because of an ongoing feud between two neighborhood groups, one from the Melpomene area and the other from River Gardens.

On Oct. 8, for example, a gun battle littered the intersection of Second and Annunciation streets with spent casings, and a teenager was later arrested in a traffic stop with a gun believed to have been used in the shootout. On Oct. 16, a teen walking in the intersection of Adele and St. Thomas streets was fired on by gunmen in a red SUV, though he also escaped injury, Sgt. Sandra Contreras of the NOPD 6th District persons-crimes division said last week. Both incidents grew out of the same feud, she said.

The Irish Channel route – which will follow Annunciation from Jackson Avenue to Washington, with one group stopping at Clay Square, and a second group making a larger loop – was specifically requested by Ed McGinnis of the Irish Channel Neighborhood Association. “It would be great to have a big ICNA turnout to participate as well to walk with them,” McGinnis said in an email to the association. 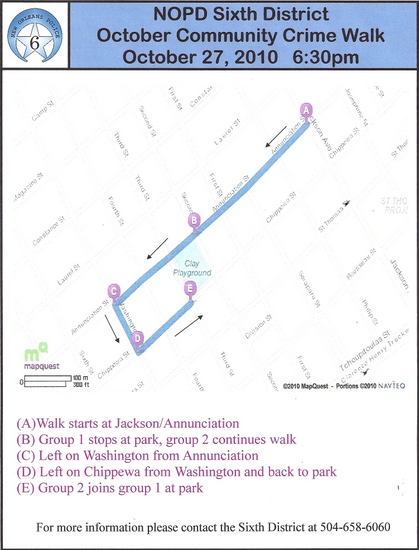